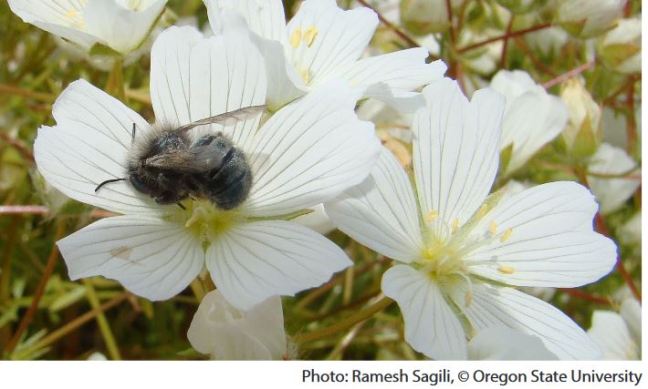 Scientists tell us there is a worldwide big decline of insect species. We depend on insect pollinators to pollinate the plants we eat. Without them we would starve. Honeybees as well as wild bees and other pollinators are seriously threatened by pesticides and mites, as well as by climate changes. One response we need to take is to stop the poisons, the pesticides and support bees. We can learn more about neonicotinoid pesticides, glyphosate and other toxins and work to educate and eradicate their use. Alternatives exist such as planting native grasses. Klamath Siskiyou Native Seeds is a small company locally that sells native grass seeds, such as California Brome, Blue Wild Rye, Roemer’s Fescue and Lemmon’s Needlegrass, as well as others. These grasses are resistant to fire, very hardy and can help eliminate the need to spray pesticides on our land.  Take a look at their website.

Another response alongside that is to intensively support wild pollinators. One excellent one is Mason bees, also called blue orchard bees. They are very woolly so they get coated with pollen. 100 mason bees can pollinate as many trees as a 1000 honey bees. They also stay close, only traveling about 130 feet so they won’t go far and get infected with distant pesticides. They also will come out when it is still too cool for honeybees, so they are crucial early season pollinators. They are solitary bees, not living in hives. Each female lays eggs in hollow places. We can duplicate that by building mason bee boxes, or buying them.

A mason bee box is usually a little birdhouse shaped box or a big bamboo tube, filled with 6″ long cardboard tubes that are like little straws about a 1/4 inch wide. We can buy paper straws to go inside the cardboard straws so we can discard the used paper straws at the end of each season. That reduces the infestation of harmful mites in the tubes. We can hang those bee boxes in our gardens or orchards, out of direct sun, like under an eave. The female mason bees will put a dollop of pollen food with an egg in it, in the tube and then dam it up with wet clay. (I think that’s why they are called mason bees, like a stone mason.) Then they will repeat with four or five more eggs in the same tube, one after the other. It is crucial to have an area of moist clay on the ground near the mounted mason bee box. They need clay to dam up the eggs. Look them up on google. In the Spring they hatch out and start doing their work, similar to bumblebees and other wild bees.

We can also support all the pollinators by planting many flowers, shrubs and herbs that pollinators like to feast on. Plan for some that bloom early and some that bloom late in the season, to give a wide range of support to pollinators. We get to enjoy the beauty at the same time and have our food plants pollinated. A win-win.

At our farm, ThistledownOrchards.com, in Selma, Oregon, we plan to build Mason bee boxes to sell to other farmers, gardeners and orchardists to support the local mason bees. You can also buy them online.

About the author –
I’m a former 9-year elected pension fund trustee and board chairman. I hold a financial planning certificate and a masters in public health education from UC Berkeley and a masters in counseling psychology. I’ve been a California licensed Marriage & Family Therapist since 1991. I began my medicine man training in my first vision quest in 1973. I was initiated as a medicine man in 2016. I have been studying Aikido for 30 years and received 3 black belts. I live and practice in Oregon as a coach, health educator, farmer, storyteller, puppeteer and musician and enjoy playing music, tending our fruit orchards, and spending time with my partner and my two wonderful children.
Jerry Allen, LMFT, SEP, MPH, Anishinaabe Mashkikiiwinini (Medicine Man)
Gratitude Way Counseling, Coaching and Health Education – jerry@gratitudeway.org